🇺🇦 This project is created with substantial contributions from our Ukrainian colleagues. #StandWithUkraine
Skip to main content
Version: 19.x

This guide provides some core practices to follow in setting up a stable, reliable environment for running automated UI tests using Android emulators (using Detox, in particular) -- be it on a personal, local computer, or a powerful CI machine.

Note that running automated UI tests is not the same as developing Android apps. Hence, you may find yourself not 100% aligned with the recommendations here, and should consider being so.

This is the most basic step in the process, as without a proper Java SDK installed, nothing Android-ish works -- at least not from command-line, which is mandatory for executing Detox.

The bottom line is that Android needs Java installed. If you want to run with React Native 66 and Android 12 then it needs to be at least Java 11, otherwise you should have Java 8.

To check for your real java-executable’s version, in a command-line console, run:

What needs to be verified is that java is in-path and that the output contains something like this:

or, if you have openjdk installed:

Note: Do not be confused by the Java version potentially used by your browsers, etc. For Detox, what the command-line sees is what matters.

If java -version yields an error, it is likely that java is either not in your path or not even installed at all. To try to understand which of the two is true, use this guide.

If otherwise the version is simply wrong, try these course of actions:

If you have Android Studio installed - as most of us do, then the SDK should be available for you somewhere on your machine*. However, for CI agents -- possibly running with no GUI, or if you simply don’t want the somewhat bloated piece of software on your computer, it is possible to simply download the SDK and tool-set, purely. Both cases are covered in Google’s Android guide about Android Studio. For the pure-tools option, refer to the Command line tools only section at the bottom.

For more help on setting the SDK up, this guide might be helpful.

Whatever option you choose, and whichever platform you’re running on (Mac, Linux, Windows), we strongly recommend that eventually you would have 2 additional things set up:

* Inspect the content of your ANDROID_SDK_ROOT and ANDROID_HOME environment variables.

Mobile-apps' automation needs an Android device to run on. If you haven’t already done so, you should set up an Emulator. But, wait - don’t go and install the default one: read through, first.

We’ve long proven that for automation - which requires a stable and deterministic environment, Google’s emulators running with Google APIs simply don’t deliver what’s needed. Be it the preinstalled Google play-services - which tend to take up a lot of CPU, or even Google’s gboard Keyboard - which is full-featured but overly bloated: These encourage flakiness in tests, which we are desperate to avoid in automation.

Fortunately, the Android team at Google offers a pretty decent alternative: AOSP emulators (Android Open-Source Project). While possibly lacking some of the extended Google services, and a bit less fancy overall, we strongly recommend to strictly use this flavor of emulators for running automation/Detox tests. They can be installed alongside regular emulators.

Here’s a visual comparison between the two - an SDK 28 (Android 9) AOSP emulator (left) vs. an emulator with Google APIs installed (right):

Here’s how to install them using the command line​

While it’s possible to do this using Android Studio, we’ll focus on the command line, as it is also good for headless CI machines.

This isn’t mandatory, of course, but it’s always good to launch the emulator at least once before running automated tests. The section below will discuss optimizing emulators bootstrapping.

At this point, you should be able to launch the emulator from Android Studio, but that can also be done from a command line console, as explained in the cheatsheet below.

See this guide for full details on the emulator executable.

We won’t go into all the details but once the proper image is installed using the sdkmanager, the option becomes available in the AVD creation dialog (see Target column of the Virtual Device Configuration screen below): 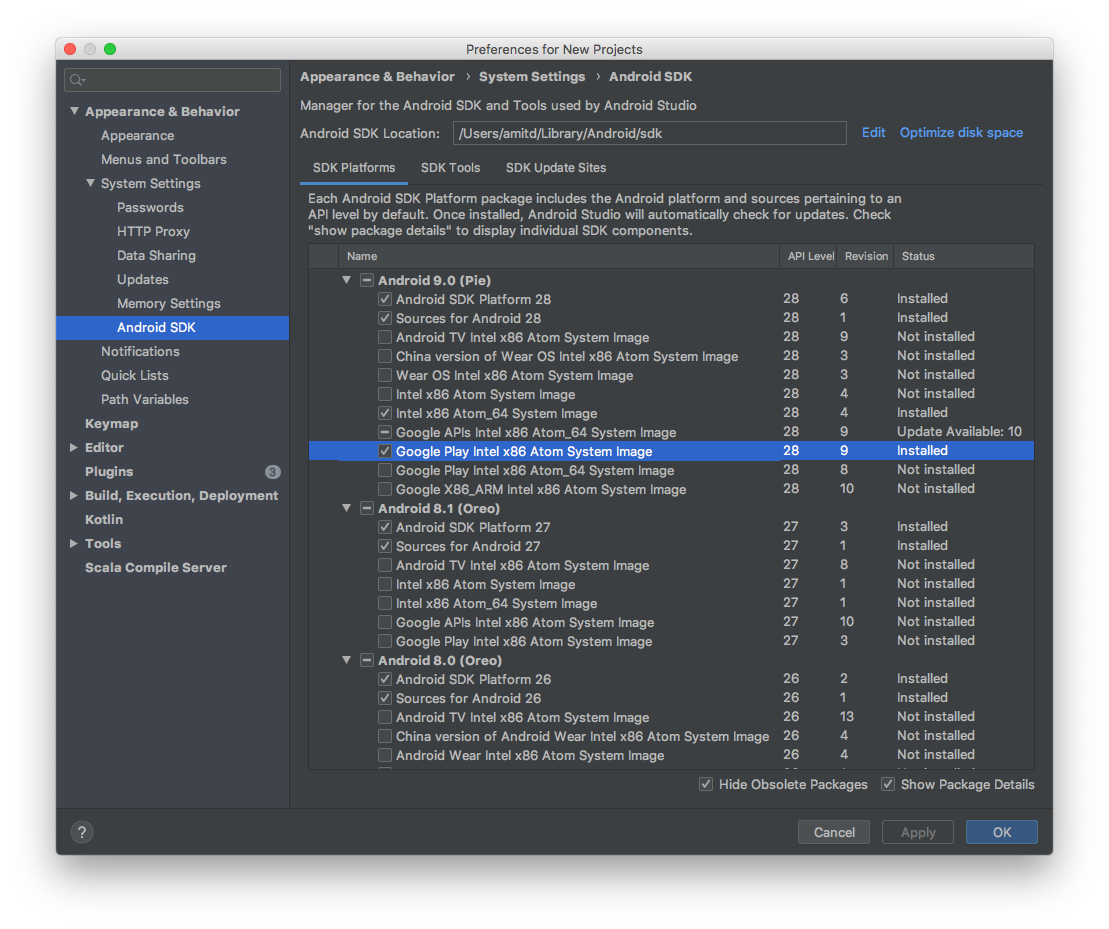 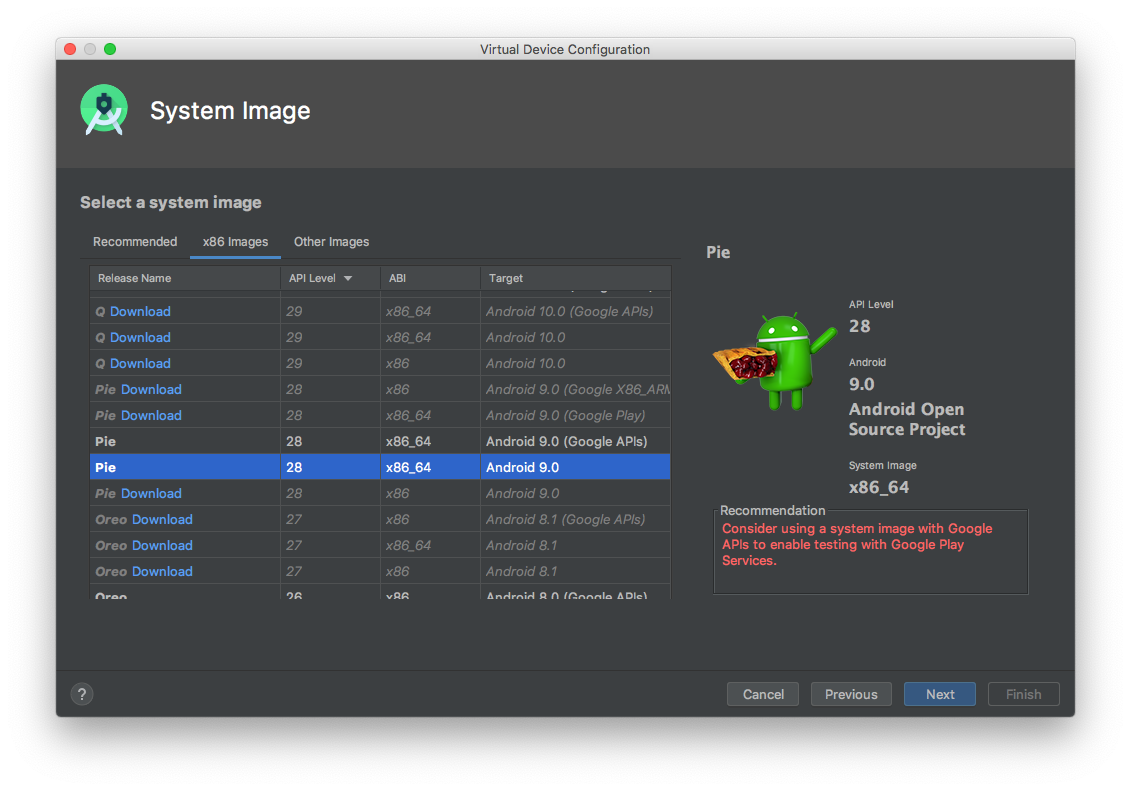 Also, be sure to upgrade your emulator executable to the latest version: If it isn’t up-to-date, you will get an "Update Available" message under the status column, instead of "Installed": 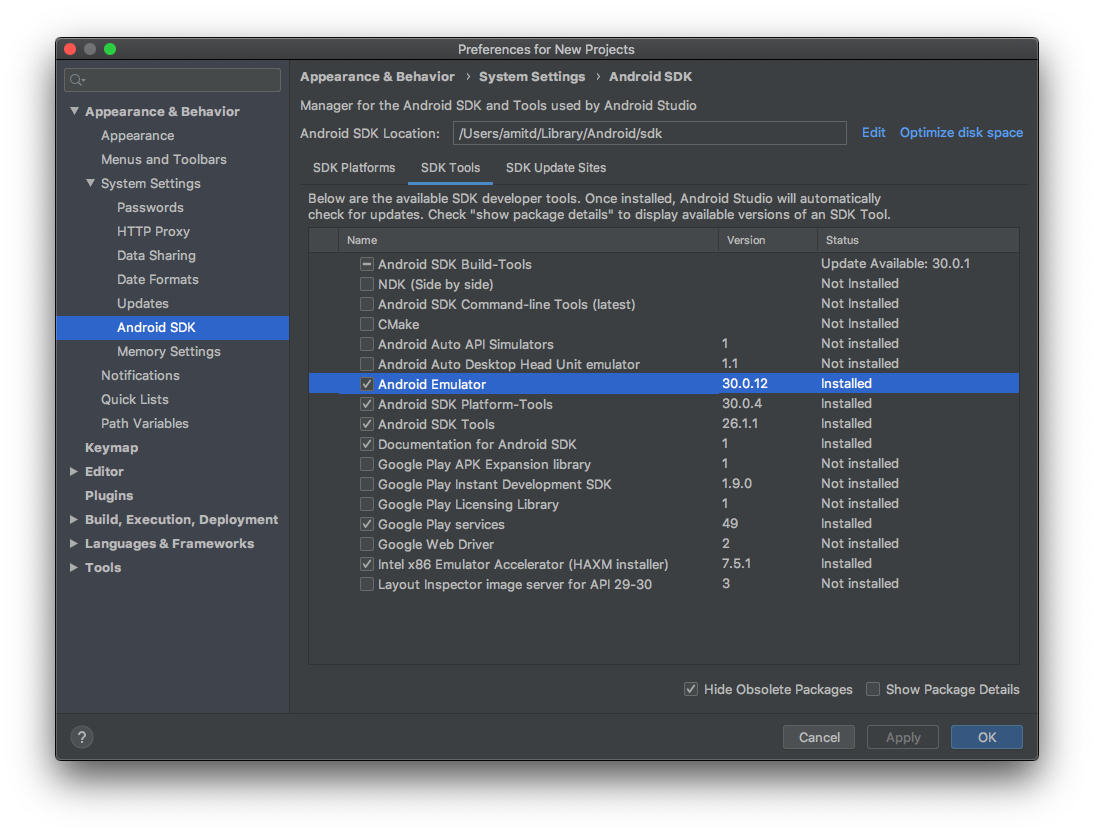 Note: It is OK if the emulator’s version is not aligned with the SDK or platform-tools' version you currently have installed (e.g. 30.x.x vs. SDK 29)

If the system allows saving a state (for example, in personal computers or a CI system that can start from prebaked images you can configure), we highly and strongly recommend setting up quick-boot snapshots for any emulator that is used for testing automation.

This is something that we actually recommend applying in the emulator itself rather than using command-line, but we’ll include both options.

In any case, the general principle we’re going to instruct is as follows:

Setting up a quick-boot snapshot from the Emulator​

Start by launching a freshly baked emulator. Wait for it to go stable.

When running, go to settings (3 dots in the sidebar) > Snapshots > Settings tab. If not already set, select Yes in the auto-save option. This should prompt for a restart -- choose Yes. The emulator should restart and save a snapshot.

Do this again after the emulator is back up, but set No in the auto-save option. Allow it to restart yet again: it will immediately boot into the state saved as a snapshot earlier.

You can also try these as alternative sources for this:

Setting up a quick-boot snapshot from command-line​

This is a bit more difficult, but is also applicable even for UI-less machines.

After upgrading the emulator’s binary to a newer version, it usually considers all existing snapshots invalid.

Each AVD generated by the Android tools gets its own directory where associated content is stored:

to name a few.

On Mac machines, the AVD directory typically maps to:

The path should be similar on Linux machines, even though $HOME isn’t /Users/root but typically /home/root (for example: /home/root/.android/avd/Pixel_API_28_AOSP.avd/).

Booting an emulator via command-line​

Shortcut for booting a verbose, visible emulator in a GUI supporting system​

Shortcut for booting a verbose, headless emulator in a UI-less Linux system

Verifying the emulator’s quick-boot snapshot has been saved​

as a reference, when the state is not saved, the typical output is:

It can be a result of an improper configuration, or an emulator launch where the -read-only argument was provided.