🇺🇦 This project is created with substantial contributions from our Ukrainian colleagues. #StandWithUkraine
Skip to main content
This is unreleased documentation for Detox Next version.
For up-to-date documentation, see the latest version (20.x).
Version: Next

Dealing With Problems With Running Tests

This page is about issues related to executing your Detox tests, typically triggered when running detox test (and not detox build, for example).

It’s a good idea to get as much information as possible about what’s going on. We can enable trace mode during tests by running our tests with:

In order to run tests on a simulator, you need to have simulator images installed on your machine. This process is performed by Xcode itself. You can list all available simulators using simctl by typing xcrun simctl list in terminal.

If you’re missing a simulator, make sure Xcode is installed and use it to download the simulator. Take a look at the Preferences screen, some screenshots can be seen here.

Once the desired simulator is installed and returned by xcrun simctl list, double check its name in the list and make sure this name is found in the detox configuration entry in package.json. The reference for the configuration options is available here.

Issue: A while after running Detox, you get a message about failure to connect to the running app, in the logs:

This can be a result of various reasons. It is generally up to you to debug and find the root cause. In any case, below are the common ones.

If you do not see your app running on the device​

If you do see your app running on the device​

Solution: This error means that your version of Node does not support async-await syntax. You should do the following:

Issue: Detox fails to match a component even though it has a testID. Detox will throw the following error:

Now, adding testID to your composite component should work:

Test Tries to Find My Component Before It’s Created​

Issue: Due to a synchronization issue, the test tries to perform an expectation and fails because it runs the expectation too soon. Consider this example:

In the test above, after tapping the Login button, the app performs several complex asynchronous operations until the Welcome message is displayed post-login. These can include querying a server, waiting for a response and then running an animated transition to the Welcome screen. Detox attempts to simplify your test code by synchronizing automatically with these asynchronous operations. What happens if for some reason the automatic synchronization doesn’t work? As a result, Detox will not wait correctly until the Welcome screen appears and instead will continue immediately to the next line and try to run the expectation. Since the screen is not there yet, the test will fail.

Solution: When you suspect that automatic synchronization didn’t work, you have a fail-safe by synchronizing manually with waitFor. Using waitFor will poll until the expectation is met. This isn’t a recommended approach so please use it as a workaround and open and issue to resolve the synchronization issue.

This is what the fixed test would look like:

Can’t synchronize the test with my app​

If you suspect that the test is failing because Detox fails to synchronize the test steps with your app, take a look at this in-depth synchronization troubleshooting tutorial.

An Element is Not Visible​

On iOS, you may run in a situation, when one of the interactions (tap, scroll, etc.) on an element fails with an error like:

The first is supposed to show what is seen on screen. The second shows the internal buffer that Detox tests for visibility; if the pixels aren’t transparent enough and less than 75% of tested region is not transparent, the view is not considered visible.

If you are developing a React Native app, then the following applies. If, for instance, you see that tapping fails due to a view with pointerEvents="none" obscuring your target — well, the only solutions are: either to make the obscurer a descendant of your target (instead of being a sibling), or to tap on the parent container.

If you see that your issue cannot be solved via testID replacement or a simple hierarchy rearrangement, then there’s a chance this is a bug in Detox. Make sure to provide your ui.viewhierarchy artifact, the generated DETOX_VISIBILITY_* pictures and a comprehensive description of the issue backed up with sound arguments.

Issue: I added the testID prop, but I still can’t find the view by id in my tests.

Let’s see an example. We will find the following view in the native hierarchy:

This is the hierarchy viewer, pointing to the native view just mentioned: 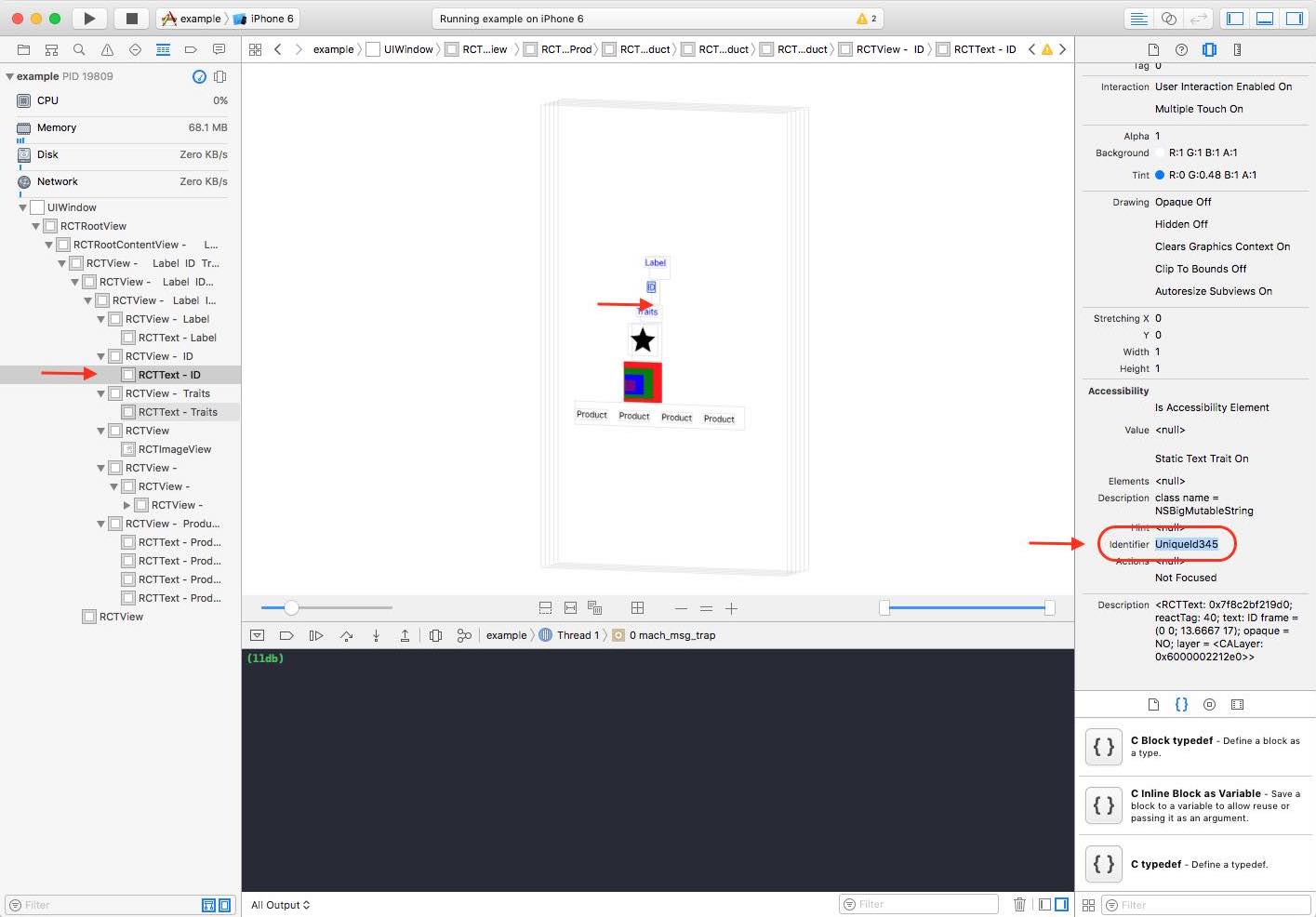 Compare to a Working Setup​

If you feel lost, try starting from a working example for sanity.

There are multiple working examples included in this repo, such as demo-react-native.

First, install, build and make sure the tests are indeed passing. If they are, try comparing this setup with what you have.

Take a Look at Past Issues​

Before opening a new issue, search the list of issues on GitHub. There’s a good chance somebody faced the same problem you are having.

How to Open a New Issue​

Before opening a new issue, please follow the entire troubleshooting guide and go over past issues.

General usage questions should be opened on Stack Overflow, where the core Detox team is active and responds to questions: https://stackoverflow.com/questions/tagged/detox

If you believe you are seeing a Detox issue, select the correct template from the options, and make sure to fill all requested information in the template. Omitting important information will likely result in a closed issue.